Photos of Berlin and Brandenburg 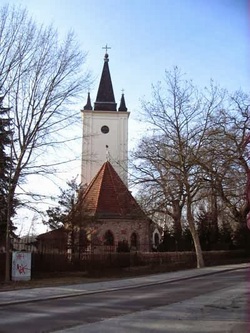 The rural side of Berlin

Berlin is a big city but it also has its rural parts - places that look like little villages with stone churches. 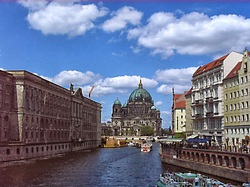 
The Nicolai quarter is the place where Berlin came into existence. Now it looks old, but it is not - except the church.

The ruins of the Anhalter Bahnhof 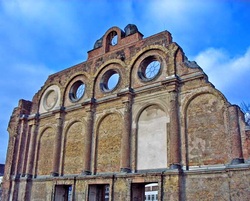 Up to World War II the Anhalter Bahnhof was a big station in Berlin. Here all the trains started in the direction of the south of Germany. The building got seriously hit during the bombing of Berlin, and the only thing still to be seen is the facade.

Hotel Adlon at the "Pariser Platz" in Berlin 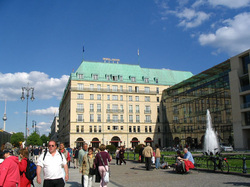 The Adlon hotel is one of the most famous hotels in Berlin. It has a long history which goes back to the 19th century. The actual building however has been rebuilt.
The "Pariser Platz" is very near the "Brandenburg Gate" in the former Eastern part of Berlin. The American Embassy is situated here.

The Belvedere in Potsdam

The Belvedere is a famous building on the Pfingstberg in Potsdam. It is a castle built in the second half of the 19th century. After WW II it more and more changed into ruins. In 1988 a group of local residents decided to rebuilt it, and today it can be visited again by tourists.