In 2012 I more and more discovered the world of colours. I am still doing the one or other drawing, but the focus is on colours. I rediscovered my coloured pencils and my watercolour pencils, tried out the pastels (the oilies and the dusties) played around with markers, combining them with the coloured pencils, and now in 2013 I've returned to my Polychromos coloured pencils.  I also returned to Digital Painting with Inkscape, Artrage and photoshop. Whereas in the past I'd often thought of traditional art and digital painting in ways of "either the one or the other" I know think of both as necessary parts of my art activities. I discovered ways of combining them - beginning with a traditional pencil sketch and ending with a digital painting or doodling around digitally and then doing "the real thing" with pencils. 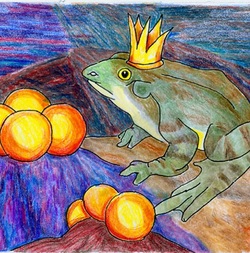 I did this drawing in December 2012. I used baby oil as a solvent for my coloured pencils.
I had some photo references for the frog, but the rest of the drawing is totally imaginative. 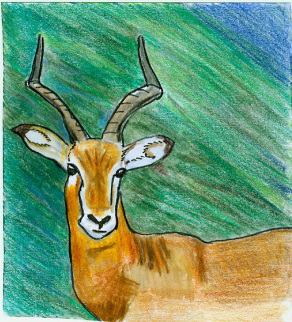 Created for the 2012 September challenge in the "Animals and Wildlife" Forum.
Coloured pencils and Markers. 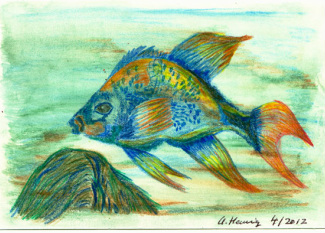 Coloured pencils; underpainting done with watercolour pencils.
I painted this for the 2012 May Art Exchange in the Coloured pencils forum at Wet Canvas.